Who is Jason Calacanis – Why Should You care?

Jason Calacanis – An Interesting look into the future of Social Media 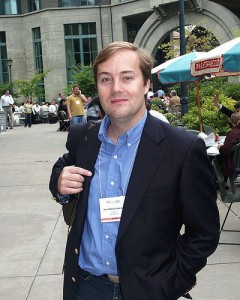 Most people who are interested in the Internet and in how to make money from it today tend to zero in on how to promote one business or brand.  Generally, the majority of questions involve “How do I get my website ranked higher in Google” or “Why should I be interested in Social Networks”?

From a purely local and specific perspective, these are both good questions (which will be addressed in later articles here on the Examiner) but for a real perception of the magnitude of the business that is the Internet, we all should study icons of the early days of the industry that is now called social media and follow these pathfinders leading our way into the future.

Jason Calacanis is both an icon and a pathfinder.

Brash, even harsh at times, many people revel in the idea of taking pot shots at Jason Calacanis the co-creator of Weblogs Inc. (Sold to AOL for 30 Million in 2005) and current CEO of Mahalo a people powered search engine. Jason Calacanis started as a Journalist publishing Silicon Alley Reporter, a 16 page New York based tech newsletter and later became a pioneering blogger long before anyone knew how popular and powerful blogs would become as a publishing platform.  Born in 1970 Jason is a very young .com era success story and it would seem he is not close to resting on the successes of the past.

The Wikipedia page dedicated to Jason Calacanis is somewhat sparse and impersonal. Wilipedia includes the following timeline of company affiliations:

Yet this simple listing of company names does not seem to give the real picture of the vision and willingness to gamble that Jason has engendered throughout an amazing career.  Many of the projects that Jason Calacanis has been involved in were far from “sure thing” propositions.  You may not even have ever heard of Weblogs Inc to this day but chances are you have read or heard of one (or many) of the blogs that were started and supported by the Weblogs, Inc. organization in the early days of blogging or citizen journalism.

The company and the vision are what Jason is all about. He brought to the world of blogging a view that it is OK to make money while being passionate about your content.  The business sense of Jason Calacanis has produced some of the most valuable publications in the world.  PC Magazine no longer publishes a print magazine yet Engadget is bringing in 2 – 3 million visitors per month reading tech related news. Tech is not dead, just tech in print is dead, who would have predicted that development in 2004 when Engadget was put together by Jason Calacanis and Peter Rojas?

All of this history is interesting, we all like to read about success stories (well most of us do) but what about the future?

Today the Washington Post re-published an article by Mike Arrington of Tech Crunch which speculates about the next CEO of MySpace. Jason Calacanis is on the short list.  Not so coicidentally Jason Calacanis sent out an email to his list of subscribers which speculates about what he would do if he were running MySpace. This article/email is entitled:

The First Ten Things the New CEO of MySpace Should Do

There has been a lot of speculation on the future of MySpace since
today’s news that Chris DeWolfe may step down as CEO.

A few disclaimers: First, I’m personal friends with Chris and think
the world of him. He is a visionary, a great leader and a true
gentleman. In our business, everyone has their run and his has been
one for the ages. If he is stepping down, I wish him the best and I
salute him for an amazing run. Second, NewsCorp is an investor in
Mahalo and has one of Mahalo’s six board seats. Complicating things
even more, the new CEO of digital at NewsCorp is Johnathan Miller, who
is also on the Mahalo board and who bought my last company, Weblogs
Inc.

Today, I’m not going to speculate on who will be the next CEO of
MySpace–or if there is even going to be a new CEO of MySpace.

What I would like to do today is talk about the top 10 things the new
CEO of MySpace needs to do in order to revitalize the site. That’s a
long version of me saying “this is what I would do if I was CEO of
MySpace”–something I’m not prepared to say (at this time). :-)

The email goes on to detail the steps Jason would take to morph MySpace into a worldwide dominate social platform (not that it is unsuccessful presently but the fact is that Facebook has really taken away all of MySpace’s previous thunder).  Jason Calacanis does not say in his email newsletter that he has taken, or will take the position as CEO of MYSpace. In fact the email would seem to be an indicator that he will not be accepting the position if offered, simply because people in the running for such a lofty positions generally do not telegraph plans prior to being announced as the next great thing.

Being mentioned as a person who is on a short list to run a potentially multi-billion $ company is just an average day in the life of Jason Calacanis.  What to do? Sit down and tell 10-15 thousand of your closest friends on your email list and detail exactly what you would do if the job was yours and then move on to the daily business of running Mahalo.

Back to the start of this article:

Who is Jason Calacanis and Why Should You Care?

We now have a small inkling of who Jason Calacanis is…. Why should you care?

I care about what Jason Calacanis says and does just as many industrialists of the 1950’s studied what people like  Firestone, Ford, and Thomas Edison said and did to become successful a generation before their time.  Jason Calcanis is not a generation ahead of many of us, including myself in age but his thinking and vision are usually ahead of the general understanding of what is happening in the social media space.

I receive and read the email newsletter jason Calacanis publishes.  Contrary to what I thought it would be (a common newsletter full of promotional material and joint venture offers) the email is a genuine piece of insight each time it arrives.  The email does not arrive on any set schedule but it is filled what Jason thinks about any number of subjects. From economics and the pressures of being a start up to Internet business analysis (as in the most recent edition regarding what to do with MySpace).  Any small tidbit in any one of these emails could  predict the future of major players in the Social Media and/or Internet business space.

Care not because, as is true of many icons of industry past, Jason Calacanis can rub some people the wrong way. Care because he has been right about so many things so many times in the past and even if he was wrong he has picked himself up with the vision to move ahead and create new successes.

There are lessons to be learned from people like Jason Calacanis no matter if you are interested in the big picture and the future of the Internet /business or if you simply want to inspire yourself to keep pushing ahead when you have a passion for a small business idea that could one day become a 30 Million dollar windfall. I suggest subscribing to his emai list or listening to his regular spots on Leo Laports TWIT This Week in Tech Podcast and Video show.   Learning more about what pathfinders like Jason Calacanis have done and what successful forward thinking people share, is never a waste of time.

This site uses Akismet to reduce spam. Learn how your comment data is processed.